There’s going to me two more After movies! A Hardin prequel & next-generation sequel

Well, this is exciting and unexpected! There’s going to be two more After movies!

According to Teen Vogue two more After films, a prequel and a next-generation sequel, are in the works.

That’s in addition to the two movies that have already wrapped filming — After We Fell and After Ever Happy, which continue the tumultuous love story between Tessa (Josephine Langford) and Hardin (Hero Fiennes-Tiffin).

“The After universe just keeps expanding,” director Castille Landon told Teen Vogue. Landon will write and direct both new films; she joined the series to direct After We Fell and After Ever Happy, following directors Jenny Gage (After) and Roger Kumble (After We Collided). “The fandom, and how excited they are and their input, it really does inspire us all as creators every single day.”

What’s The After Prequel About?

** spoilers for the first two After movies ahead **

The prequel is loosely based on the After series book Before, which author Anna Todd penned from the perspective of Hardin. But Landon says the movie will be a “larger conversation” tied to what happens in Before, with a more expanded plot. “He’s gone through a lot of trauma in his family life and in his relationships, and [we’ll] see more of that messiness before he meets Tessa, and how that experience changes him,” she says.

Since it will feature a younger Hardin, Hero, now 23, will not reprise his role in the film – which is kinda sad for us, but we’re excited to see who they cast in the role.

What’s the After next-gen sequel about?

** MAJOR spoilers for the ending of the 4 After movies and books ahead, don’t say we didn’t warn you! **

Seriously, turn back now if you don’t want to know what happens to Hardin and Tessa…

The sequel will follow Tessa and Hardin’s children, Emery and Auden, and their cousin Addy.

The three younger characters are discussed in the last pages and epilogue of Todd’s After Ever Happy, and the team behind the forthcoming films sees the continuation of the story as a way to reach the next generation of After fans.

While Hardin and Tessa will be in the movies, it will be as supporting characters, and Hero and Josephine won’t reprise those roles.

When will the movies be out?

It’s still early days for the team working on the next two films, so there isn’t any casting news or release date as of yet. But the films will shoot back to back starting this fall, so it won’t be too much longer before more details emerge.

Plus, the next movie in the series, After We Fell, is set for worldwide release in 2021.

Are you excited for an ‘After’ prequel and sequel? 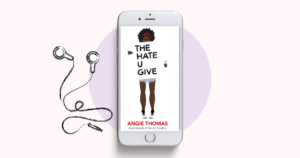 5 Audiobooks To Listen To

10 Movies Starring The Cast of Riverdale

Here Are The Exact Makeup Products Zendaya Used For The Oscars

Here’s How To Watch The 2021 Oscar Nominated Movies

When you can’t decide on what nail design to go

If you love #Riverdale, check out the 🔗 in bio

Did someone say #Selfcare Sunday? #missydotie . .